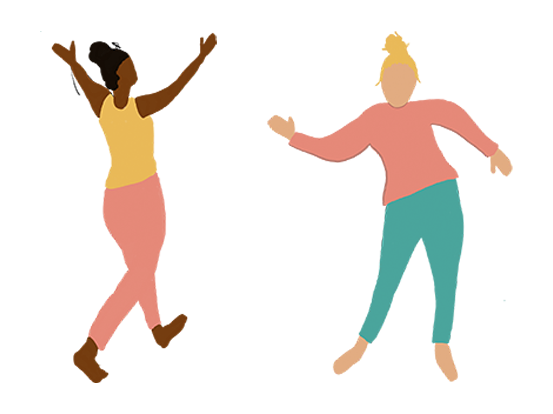 Dance Rehab in the community & hospitals. Impact of sessions on participants & their families

In 2018, aged 56, Theresa finished her work at 6pm in the City of London, heading to her daughter’s house, she babysat for her grand-daughter until 8pm. She visited every Thursday evening to spend precious time with her beautiful granddaughter and allow her daughter free time to attend yoga class. After heading home and getting dinner, Theresa went up to bed to read a book before drifting off to sleep. Same as every night.

At 6am Theresa woke up as usual and tried to get out of bed but was unable to move her legs. She shouted to her son who came running upstairs into her bedroom. He laughed at her, joking she was getting old and showing her age. As tears began to run down Theresa’s cheeks, he realised very quickly that his mother was showing signs of more than just a sore leg, and helped her downstairs. Within a few minutes her breath shortened and her speech began to slur.

He immediately had a flash in his head of the FAST advert for identifying stoke symptoms and quickly dialled 999 stating he suspected his mother was having a stroke. The ambulance arrived within a few short minutes and drove her straight into A&E, where, much to Theresa’s luck, an observant doctor stated “I think that woman has Guillain Barre Syndrome, get her to neurology straight away.” The first 24 hours are the most important and thanks to the doctor’s observations, Theresa was seen by a neurologist and into the Intensive Care Unit. “I wanted to scream how much pain I was in, but I couldn’t move my lips, my voice wasn’t working, and I felt like I was drowning as I couldn’t breath by myself. It was terrifying as I watched the world around me, I was able to see and hear but my body wouldn’t respond. It was the worst feeling in the world. I felt like the air weighed a tonne but I couldn’t speak to let anyone know.”

After a number of months in ICU, Teresa was transferred to Royal Hospital for Neuro-disability as a residential in-patient. She was undergoing intensive rehabilitation treatments when she first was referred to take part in CoDa’s dance sessions on Ward within the hospital. Still unable to speak properly and in a wheelchair, Theresa took part in sessions for 18 weeks, before being assessed as well enough to be discharged.

In November of 2019, waiting in the RHN hospital cafe before delivering a weekly session, Nikki spotted a familiar face. It was no other than Theresa. Spotting her immediately Theresa stood up and threw her arms around Nikki, exclaiming “Look at me go….I can walk 250m without my stick”, both women screeched with joy, before sitting down to catch up on Theresa’s progress since being discharged from the hospital. “The one thing I’ll never forget is how you helped me to dance. The way you helped us to use contact with each other – it was the only time of the

week I was able to be touched by someone when it wasn’t to stick a needle or a catheter in me. You’ve no idea how much those sessions meant to me.”

That day Theresa volunteered with CoDa in the weekly session and has since offered to contribute to REWIRED as a Creative Consultant. She hopes to give a unique insight as someone who has been trapped in her own body and understands the importance of coming out the other side.

“Dance can say things that words can’t and I’d love to be part of the creative process. It sounds really exciting and I want to keep myself busy.”

“Dance can say things that words can’t and I’d love to be part of the creative process. It sounds really exciting and I want to keep myself busy.”